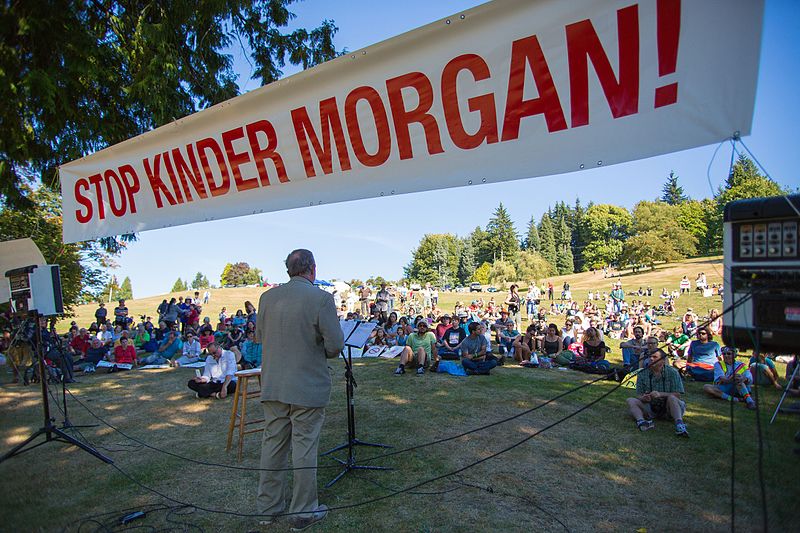 “It’s not the government’s role to put its thumb on the scale of any particular project – it undermines the public confidence that the environment is getting the protection that it needs. Governments issue permits, but communities grant permission.”

An important statement of democratic values, and well put. The speaker was Justin Trudeau (video here), and he repeated this line on multiple occasions during the federal election campaign.

But Justin doesn’t walk his talk. He approved the Kinder Morgan TransMountain pipeline enlargement in the face of massive public opposition – both Indigenous and settler – along its route in BC. And he left subsequent decisions in the hands of a pro-industry-biased National Energy Board. The NEB has now ruled that Kinder Morgan does not need to comply with the city of Burnaby’s planning procedures on tree-cutting and fence installation in its drive to expand its oil storage facility on Burnaby Mountain in preparation for the pipeline. As one local resident puts it, “KM can’t get their crap together to follow a simple tree-cutting permit process, but if I want to build a deck, I have to get a permit.”

Meanwhile, Kinder Morgan has been placing snow fencing in upstream creeks to prevent salmon spawning where its proposed pipeline route crosses those waterways. This is in violation of the NEB conditions for pipeline approval, and the NEB has instructed KM to not install any more mats – but has failed to require that existing mats be removed.

But this is not just a matter of a big company evading the rules that apply to everyone else. It is more than that – it’s a big company (incidentally formed out of the remains of the notorious Enron Corporation) riding roughshod over local democracy and the wishes of local people, and doing so with the approval of the federal government. It is a dangerous and worrisome development, because circumventing local jurisdictions undermines the very core of our democratic system in Canada.

And that potentially affects all of us, throughout the country.

In that context, we have to examine the stance of the Saskatchewan government. When Kinder Morgan challenged the city of Burnaby’s by-laws procedure, the governments of Alberta and Saskatchewan both piled on in support of the Texan corporation. This is understandable, if regrettable, from an Alberta government which wishes to push more diluted bitumen from its own territory to the coast. But Saskatchewan has no direct interest – no Saskatchewan oil would be transported on the pipeline. By intervening in this case, Brad Wall’s administration was essentially saying that a federal decision by an un-elected body could override more local democratic decision-making. This is particularly ironic at a time when the same Saskatchewan government is threatening constitutional action to prevent federal carbon pricing proposals from being implemented in the province.

We can only conclude that neither the Sask Party nor Mr. Trudeau’s federal Liberal administration has any serious interest in decisions being made by the people for the people: for both, it seems, democracy is trumped by corporate interests.

Until government can be persuaded or pressured to take its democratic responsibilities seriously, probably the only answer is to follow the example of the Secwepemc activists who have removed KM’s snow fencing from creeks on their traditional territory, and who are building tiny houses directly in the line of the pipeline route: find a way to nonviolently take back power into our own hands whenever it is usurped by the corporations and their political collaborators.

We in Saskatoon were never even asked our opinion on Enbridge’s Line 3 expansion project – which not only threatens the climate by enabling oilsands expansion but also threatens us locally in a more direct way should any of the diluted bitumen leak into the South Saskatchewan river near Outlook. Over the next year CJS will be working with groups across Saskatchewan, Manitoba, Minnesota and Wisconsin with a view to eliminating both of those threats as well as those to other communities.