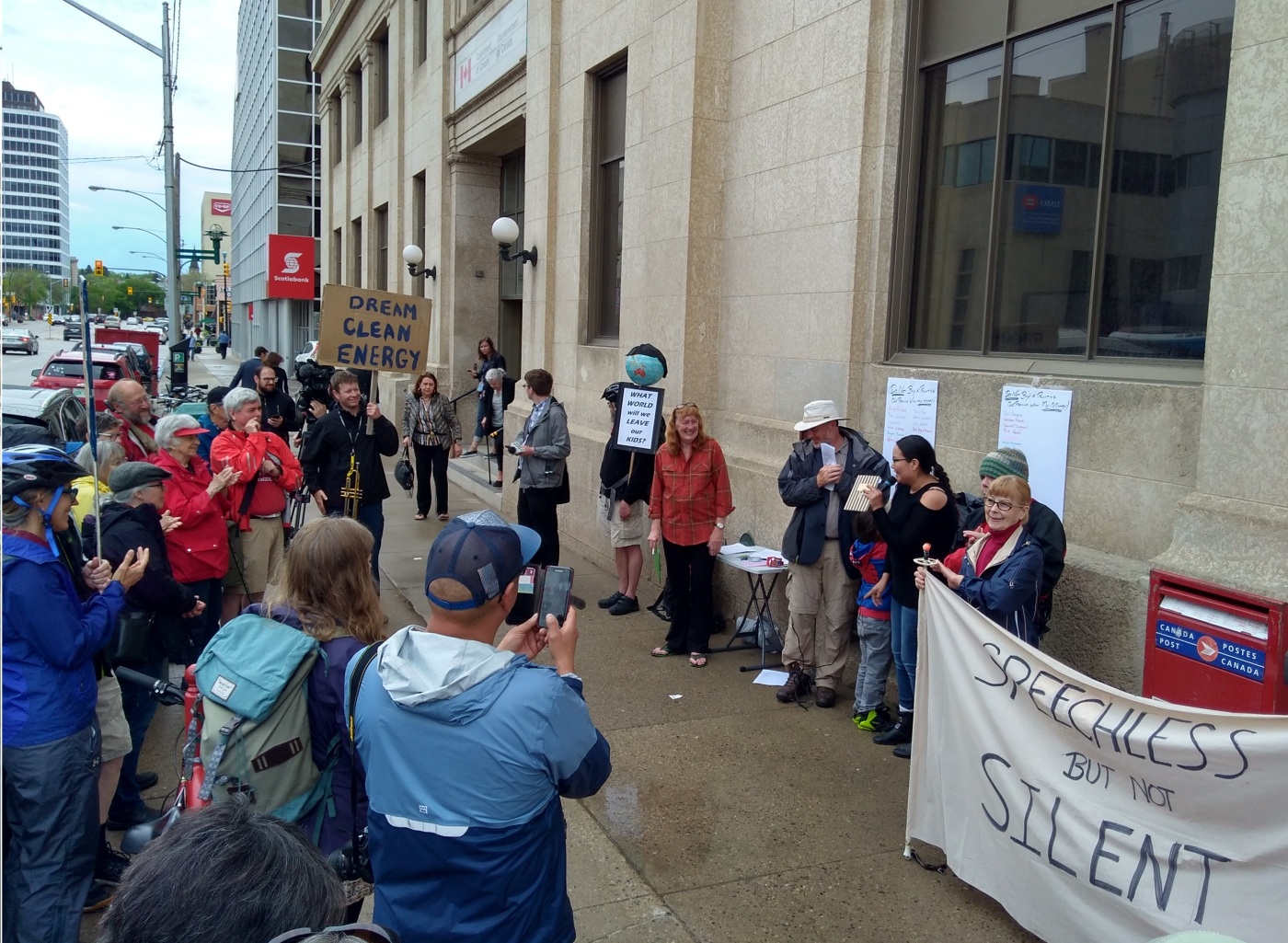 In conjunction with the Council of Canadians, we held a rally on Monday as part of the National Day of Action against the federal buyout of the Kinder Morgan TransMountain pipeline. Many songs, poems and words were shared amongst the many gathered. Here is the speech prepared by Mark Bigland-Pritchard:

$4.5 billion of taxpayers’ money to buy an elderly pipeline, a tank farm, a few pumping stations and the rights to build a brand new, shiny, bigger pipeline.

At least $7.5 billion of taxpayer’s money to actually build it.

Is that what people wanted when they voted in this government?

And this to assert and enforce the findings of a flawed assessment process, in which interventions were severely limited, cross-questioning of the proponent was outlawed, climate impacts were off the agenda, and where the panel accepted without serious question KM’s flimsy pretense of understanding of how a bitumen spill would behave in the Salish Sea – based on a brief experiment in a water tank in Calgary.

Admittedly the Trudeau government did bolt on an element of public consultation. But First Nations leaders approached for those consultations have described them as “one-way streets” rather than two-way dialogues, failing to meaningfully recognize title, governance rights and use rights. And while those consultations were still going on senior civil servants were being instructed to put together detailed proposals so that the government could announce approval of the project.

And it’s not what the Liberals promised in the 2015 election. Their platform said this:

“We will also ensure that environmental assessments include an analysis of upstream impacts and greenhouse gas emissions resulting from projects under review.”

When asked specifically whether that policy applied to the TransMountain project, Justin Trudeau said “Yes it applies to existing pipelines as well,” and “That process needs to be redone.”

Not for the first time, they have broken a major election promise, and on the flimsiest of grounds. I have listened carefully to the arguments put by pipeline advocates. Most are total red herrings based on false information.  But there is one Saskatchewan concern that makes sense to me – concern for the jobs of steelworkers at the Evraz plant in Regina.

But, you know, we need steel for wind turbine towers. We need it for infrastructure to get clean water to all First Nations. We need it for turbines for run-of-river hydro and biosyngas power plants. We need it to house battery charging stations for electric vehicles.  I could go on, adding more to that list. We need all these things. We don’t need pipelines to expand bitumen production. We need industries which recognize the limits set by the laws of physics and the requirements of biology – and most of those will require steel. We need to plan for them, and I suggest that that is where the Trudeau government should be using its influence – creating jobs in the 21st century economy, building for the future.

But I do know this.  There is an answer to the fear of job loss. There is an answer to the fear of change.  There is an answer to the greed and entitlement of the oil industry bosses.  That answer starts with good planning for a clean economy and a clean energy system, and for all those jobs we will need to run it.  As we do that, we grow hope – hope for a better society and a better way of life. And it is underpinned by love. Love that demands a liveable future for our children. Love that cares about all those people worldwide whose lives and livelihoods and homes are threatened by climate change driven famine or flood or disease.  And love for the land, the rivers, the plants and the animals with whom we share this planet. With that love – and only with that love – we can build a better future for everyone.